So I guess, taking off the dream catcher did take away our unpleasant nights. Maybe I'm superstitious, but my baby and hubs seem to be sleeping well, too. To be honest, I'm sleeping like a log these days, such deep and restful sleep, that I ache to go to bed even during the day!

Or maybe it is pure exhaustion. Taking care of the baby, home and work (and the husband, in-laws, maids and others) is tiring work. I've been more or less ill lately: the cough and cold, and dizziness doesn't seem to fade. And to think I used to pride myself over not falling sick too often! The weather is remarkably warm for this time of the year, and I the water crisis is scary, too. God knows what the world is coming to. Or maybe even God doesn't know. After all, we're bringing this upon us, right.

Aarush is growing up by the minute, and I catch myself gawking over how quickly he's growing. It won't be too long before he starts having his own set of friends and ambitions that I'm not at the core of, and his dependence that currently seems a pain will soon become a dream. I'm already preparing myself for the day when he walks up with a girl in tow and tells me she is her girlfriend. My hypothetical answer is, "Great! Take care of each other" but something tells me it will probably change when the actual situation occurs. LOL.

Then again, I ought to give myself a pat on the back for still being a fun girl - or at least that's what my (true) friends and colleagues assure me. Validation came in the form of 2 young men trying to chat me up and ask me out when I was partying with my friend. For someone who considers the word "beautiful" inapplicable to herself under the remotest circumstances, this gave quite a kick. Just like old times. Little did the boys know that they're addressing someone married for almost 4 years and mom of a 1.5 year old son! Should've told them that just to gauge their response... ROFL

Reading has been a possibility this week since the bub was with grandma. Finished DeJa Karma - brilliant story and very well written. Absolutely un-put-down-able, deadly from start to end. Now that's a rarity. A very delightful one. The court case did not hold much weight, but the way the author has traced the life of Jay Singh is amazing. You can actually see the characters come to life and you feel endearment towards the protagonist, his aide Bhima, lover Manavi, friends, mom and shrink. When the writer can provoke emotions within you, that's his true victory. Vish Dhamija has done it, kudos.

I'm now onto Yes My Accent is Real by Kunnal Nayyar, better known as Raj from Big Bang Theory. His compilation of essays and experiences is cute, simple yet adorable. I'm also juggling Shikhandi simultaneously, it's like a dash of sugar and spice, and a very palatable combination.

Come to think of it, I wasn't someone who was comfortable with reading several books at once. It seemed disloyal to me, like I was cheating on the book in my hand by seeking entertainment in another. However, with the kind of books that I'm reading now, as well as the unpredictable time I have on my hands, this method is working well. I'd need an unlimited amount of free time and a really marvelous book to go back to my former style.

And who can guarantee either? Well, this week, yes, coz the baby's away again at Naani's.

(Bless that woman, don't know what I'd do without her.)

Holi was uneventful, except for some polite neighbours who carefully smeared dry, organic colour on my face. But Kapoor and Sons was a plethora of events and reactions. I went assuming a title like this and Alia Bhat's presence could not mean a film with depth, but the story is full of drama and conviction. So much turmoil within relationships, unspoken dreams and confessions, mistakes voluntary and spontaneous. Rishi Kapoor's makeup was stunning and so was his acting. The rest - Ratna Pathak, Sidharth Malhotra, Fawad Khan, Rajat Kapoor were also superb. You actually get involved in their lives and their difficulties, and that was a win for me. Alia, well, she's what she usually is. So, no points there. The songs could have been cut out or cut short, though.

And there's not much I can say for the Superman and Batman movie that everyone was waiting eagerly for. A complete disaster, apart from the character and acting of Lex Luthor. The Now You See Me star reminded me of Shahrukh Khan throughout the movie, and thee climax was like Karan Arjun too. Seems like the director was mighty impressed with King Khan's movie.

Now for work, a little cricket, maybe some party/catchup/social time, reading and sleeping that's on the cards over the coming days.

Hope you doing fine, fellas. As the financial year draws to a close, I wish you luck and success in the new year. May you all get awesome salary hikes and truckloads of bonus. Take care, and don't blow it all up. Don't save it all either. Donate to the needy. And get something for yourself, too :-)

Having to deal with idiots is no joke. Look around and you will find them in plenty, at work and outside - no dearth of them at all. Birdbrains, the bunch of them.

And it's worse when you're having restless nights abounding in nightmares.

Not a mighty chirpy temperament that I'm in, I'm sure you can tell.

So, well. I'm back from my sojourn - first to the north and then down south (like not really down down, but kinda downer than where I generally am). I was thinking that I'd be pleased to be away from the city (and most importantly, routine) during this period. But well, I did get homesick after a while and wanted to return to home-made food and family.

Landing in Pune was a delight, and things are back to normal (too fast for my liking!)

So, for those of who are wondering why I'm getting nightmares...

(You forgot, right? That's all right. Shan't let you go unless I address this.)

So, I met my colleagues from Hyderabad, China and the US in HYD. It was great catching up with all of them and learning together. Needless to say, I got heaps of gifts from them and I couldn't wait to return to Pune to adorn my desk and home with them. One of the gifts was a dream catcher, and for those of you who don't know what that is, here is a picture of what mine looks like. 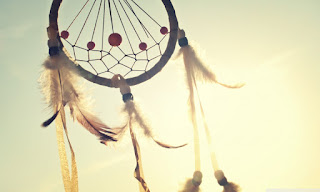 Not surprisingly, I was mighty excited to get this gift and I was aching to put this up in my bedroom to give my bub and hub wonderful, rosy, happy dreams.

Turns out, our next couple of nights were anything but pleasant. Both me and my husband, baby too I think, tossed and turned and experienced restlessness. I refused to believe that the dreamsnare was to blame, but my doubts were confirmed when my hubby also expressed the same thought.

I did a bit of research online (obviously), and I came across several people who had reported poor nights after putting up a dream catcher. Is it true? Is it just our imagination? Stress?

Can't say for sure. But I did take it off and we shall wait and watch how the next few nights go.

They say the best dreams are seen with your eyes wide open.

Unless you're only daydreaming without any constructive effort.

Apart from that, I am sorry to say, I did not catch up on writing and blogging as planned. I was brooding over how I missed my baby and home, and actively engaging on social networking websites to keep my loneliness at bay. I did manage to read though - Shikhandi by Devadutta Pattanaik and With a Pinch of Salt by Jas Anand. The former is intriguing, the latter, well it's all right, nothing remarkable. Tends to drag.

I'm now reading Vish Dhamija's Deja Karma and it's quite interesting. I hope it keeps up the pace and suspense - been a while since I read John Grisham or Perry Mason, and I do love courtroom dramas.

The baby's doing fine, thanks for asking :-) He's getting naughtier (and cuter!) by the day, though he gives me ample reason to fret when he does not sleep or eat well. I'm wondering about his education already, given that parents these days plan ahead like the world's going to end if they enrol their kids in a 2nd preference school. Any tips from experienced folks are most welcome. I could do with some ready info that I don't have to verify or dig up amidst my 100 chores and responsibilities.

That's that for now, fellas.