I told you I was at the end of the Drona Parva and I’ve finally finished it. There’s now about 220 pages to go before I can place this book back on my shelf after an exciting and memorable read.

You know Drona was the guru of the Kauravas and Pandavas, and his favorite sishya was Arjuna, though his own son Ashwatthama was also an excellent warrior. However, in yuddha (=war) there is no relation and no memories. Only fighting your best is your real dharma. And if dharma bids you to tell a teeny-weeny lie, then it ain’t fully wrong either. (Though Yudi WAS punished for this. Later later.)

Drona was blazing on the battlefield. He was a brahmana, yet the Kaurava Senapati fought as if he were a kshatriya which was not his true nature. He embraced adharma and loosened massive astras on common soldiers. To rein him, the only way was to tell him about his son’s death. And the fib was told. By Bheema and none other than the great Yudhishtira. Prompted by Krishna, Dharma deva’s son told this one and only lie in his lifetime. And thereafter, his chariot, which always stood a palm’s length above the ground, hit the earth and became like any other normal ratha.

When Arjuna blamed Yudi for killing his teacher, Yudi said something that reminded me of my own philosophies in life; he said, “I wouldn’t have done it, if I was to regret it later.”

Life is too short for regrets, buddies. Just live life the best you can, and make sure whatever you do, that’s what your antaraatma (=inner soul) tells you.

Hearing about the perfidious way in which Drona had been murdered (Dhrishtadyumna beheaded him when he put down his weapons and sat in dhyana), Ashwatthama went berserk. He invoked the narayanastra to annihilate the entire army. Vishnu’s astra, the greatest in the entire universe, wreaked havoc on the Pandava legions. Once again, Krishna had to save the day. The astra could only be subdued if it was worshipped. All the soldiers and warriors who fought against or resisted it were burnt to ashes...

Govinda told them all to lay their artillery down and prostrate themselves to the supreme of all astras. Bheema, the crazy kid that he is, refused to bow down, and continued fighting. What occurred was a comic series of events. Just imagine this. Krishna and Arjuna jumped outta their chariot and ran to the Vayuputra. They wrestled his arms from him, and forced him to the ground... Watta fearless and quick-tempered fellow! But just as sweet and caring...

Thus ends the Drona Parva, and now Karna becomes the commander. What a war this has been! Bheeshma fell on Day 10, Drona was slain on Day 15... I’m not sure if the remaining part of the book will be as engaging as it has been uptil now. Fingers crossed!

I’m thinking about what book to read after this... I asked you folks about Stephenie Meyer but doesn’t seem like anyone’s read it. I’m looking at a list of good books that Landmark recently recommended in its newsletter. A few of them are : Eunoia, Enchantress of Florence, The Girl with the Dragon Tattoo, Sea of Poppies, The End of Mr. Y and The Brief Wondrous Life of Oscar Wao. Leme know if you find them fascinating... Or any other...

Hey hey hey, the tough task is done! I’ve uploaded our Goa snaps. There were close to 330, and I had a monstrous time trying to edit, delete and order them. Have brought them down to a more reasonable number, and also put in some captions so you know what I’m talking about! Here are a few of my favorites!!

The first is an amazinggggg snap (I dunno who took it!) on the waves, the next Colva beach, after that a pic from the Carnival parade, then a teeny-weeny glimpse of the dolphins (try hard!), followed by another parade picture, and the last is a photo of the Rathi khandaan (who I keep talking about so often) - Anand bro, bhabhi, me, mum, dad, Abba, Ammi... 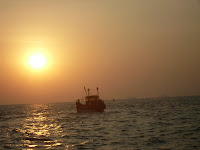 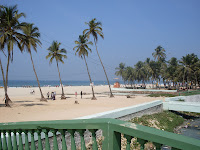 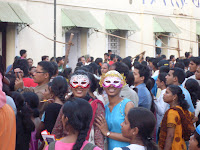 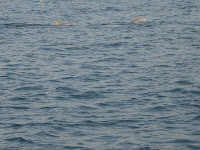 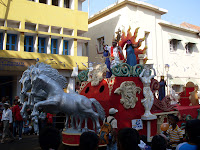 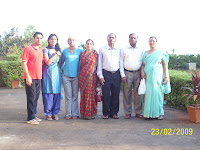 You can check out more on this link - http://picasaweb.google.co.in/anuja.rathi/GoaTripFeb2009?feat=email#